Keep Calm and Climb On

After two promotions in his military career, and one at Scotiabank, Career Edge alumni Anthony Alliot will embark on arguably his most ambitious and daunting climb next month.

He joined the Canadian Armed Forces Reserves nearly a decade ago “looking for unconventional challenges.” Starting as a Private and now a Master Corporal, Scotiabank selected Anthony as a representative on the True Patriot Love Scotiabank Expedition to climb Mount Lobuche (6,119 m). In partnership with True Patriot Love Foundation’s ongoing initiatives, the trek aims to raise funds to support military families, including more than 100 community-based programs across the country that address the unique challenges resulting from service including mental health, physical rehabilitation, transitioning to civilian life, and the special needs of children. 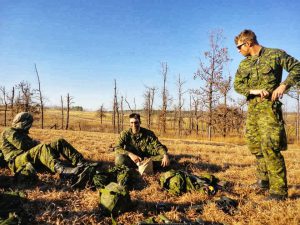 Anthony said his goal of climbing a mountain of this magnitude derives from his elementary school days, when his parents bought him a book about Sir Edmund Hillary, one of the first climbers confirmed to have reached Mount Everest’s summit.

“To have my employer give me the opportunity to achieve this, while raising money for a cause dear to me – it’s a culmination of my life. It brings all my worlds together.”

This time last year, he was completing his four-month Career Edge paid internship as a recruitment consultant at Scotiabank. Retained full-time, Anthony currently recruits for their Retail and Small Business Banking teams in Newfoundland, Quebec, and Montreal. He also works on the Scotiabank Military Talent program, which promotes the hiring of Veterans and Reservists within the bank. Anthony continues to serve as a Reservist in the Canadian Armed Forces and will reach one decade of service in June.

Visit True Patriot Love Foundation if you wish to donate.

The Career Edge team would like to wish Anthony safe travels on the unconventional challenge ahead!